Joseph Martin Liebling was our guest conductor during the 2010-2011 season (#45). The former music director of the Oakland Symphony Chorus and co-founder of the San Francisco Symphony Chorus, trained under Robert Shaw. Joe is our good friend, a repository of endless knowledge about choral music, and a constant source of inspiration and encouragement.

Stories about our friend and guest conductor, Joe Liebling: 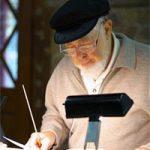 Joseph Liebling - While Joe Liebling has never, with the exception of the year he was guest conductor, held a formal post with BCCO, he has had a profound influence on our music-making for many years. 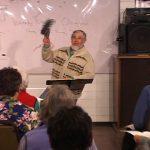 Ode to Joe - Ode to Joe , with lyrics by Mary Rogier, celebrates the special relationship between Maestro Joe Liebling and the Berkeley Community Chorus & Orchestra.