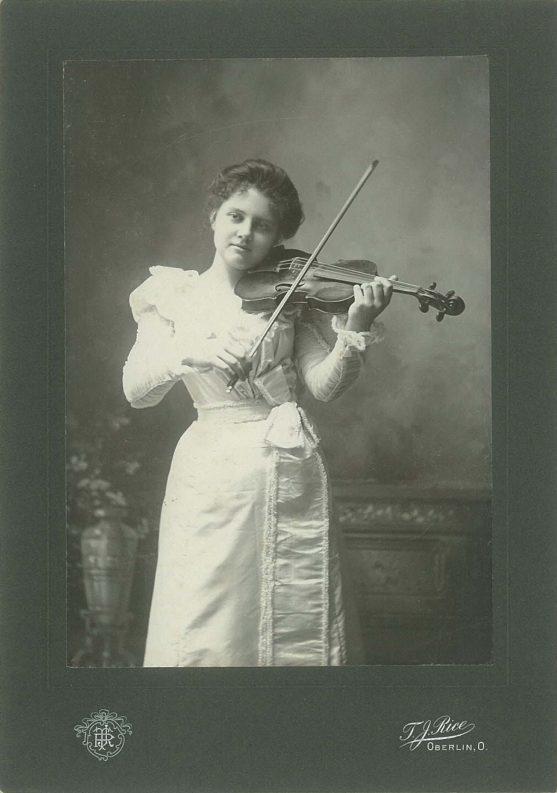 My grandmother, Charlotte Demuth Williams, was born in 1880 and grew up in Oberlin, Ohio.

Her father, John Arthur Demuth was a professor of music at the Oberlin College Conservatory, where he taught music theory, piano and four wind instruments. He started the Oberlin Conservatory Orchestra, which remains to this day one of the finest conservatory orchestras in the country.

My grandmother was a prodigy on the piano, beginning her studies at the age of four. When she was eight, she could play all of the Bach Two and Three Part Inventions, and change keys on request.

She began taking courses at the Oberlin Conservatory when she was ten. By the time she was fourteen, she had completed four years of music theory. At the age of twelve she began her study of the violin, for which she had a talent that exceeded her mastery of the piano.

By the time Charlotte was sixteen, she had completed with honors everything the Oberlin Conservatory had to offer. Because she was “too young,” the Conservatory declined to give her a degree.

Her father decided her musical education was not complete, and so with Charlotte’s grandmother accompanying her as chaperone, they left for Leipzig. Charlotte was a student for three years between 1897-1899. When she arrived at the Leipzig Conservatory she was seventeen years old.

After her formal auditions, the young Ausländer from a small town in Ohio was assigned to the most prominent violin and piano teachers on the faculty. She was quick to establish her reputation on both piano and violin in the musical community of Leipzig.

Soon after her studies began Charlotte made acquaintance with another teenage phenomenon, Wilhelm Backhaus who, at fifteen, was two years her junior. He would go on to be one of the preeminent pianists of the first half of the 20th century. They established a friendship which would last to the end of their very long lives.

These two very talented teenagers learned that they could make good pocket money by playing piano-violin sonatas at faculty dinners, where they performed sonatas by Bach, Mozart, Beethoven and Brahms.

Leipzig at the end of the 19th century was very much the center of the musical world in Europe. This was, in part, because of the Gewandhaus Orchestra. Leipzig was also home to what was the best music conservatory in Europe.

The always-precocious Felix Mendelssohn was a fixture in Leipzig’s musical life, especially during the last twelve years of his very short but highly productive life.

Mendelssohn also had the distinction of founding the Leipzig Royal Music Conservatory in 1843, which would come to serve as a model for many other music conservatories, including Oberlin.

Given Mendelssohn’s prominence in the musical life of Leipzig, it was not surprising that there would be several gala celebrations in 1897, on the occasion of the 50th anniversary of his death.

What is surprising, and perhaps even implausible, is that is that a seventeen-year-old young woman from a small town in Ohio, who had not begun her study of violin until she was twelve, would be given the singular honor of playing the Mendelssohn Violin Concerto at the 50th anniversary celebration of the composer’s death.

Also of note, Charlotte’s fifteen-year-old friend, Wilhelm Backhaus, was chosen to play the Mendelssohn Piano Concerto No. 1 in G-minor.

Both of these performances were met with great acclaim—I have the reviews that appeared in the Leipzig newspapers.

My grandmother would go on to be the first student in the history of the Leipzig Conservatory to graduate in two instruments, for which occasion she played in two weeks the Beethoven Violin Concerto and the Beethoven G-Major Piano Concerto.

A couple of footnotes: my grandmother went on to have an illustrious career as a performer and teacher. She would eventually join the faculty at the Oberlin Conservatory, which awarded her, very belatedly, a Master’s Degree. She later played in prominent chamber groups in Cleveland, and she was a force in the creation of the Cleveland Women’s Orchestra.

As a boy and an adolescent, I spent endless hours listening to my grandmother practice piano and give violin and piano lessons. Even into her 90’s she practiced three hours a day.

A born raconteur, she talked often about her years in Leipzig, and it was clear to me that her performance of the Mendelssohn Violin Concerto at the 50th anniversary of his death in 1897 was very much a highlight of those years.

Among the many gifts given to me by this most remarkable woman, my grandmother encouraged my abiding love for classical music. To this day I cannot hear a performance of the Mendelssohn Violin Concerto, live or recorded, without thinking about Charlotte Williams. I wish—oh how I wish—I could have heard her play that concerto with the Gewandhaus Orchestra. But that, alas, was forty years before I was born.