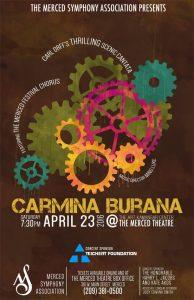 Sometimes the best experiences are the ones you get dragged into kicking and screaming. Ok, I wasn’t that dramatic, but the first time I heard that Ming was looking for singers for a performance of Carmina Burana in Merced, I gave out an audible “yuk.” For me, the piece was overplayed on the radio and over-performed by every imaginable chorus to the point of nausea. A loud and bombastic cliché. I was definitely not going to sing it.

Then Jerry Freiwirth cornered Deborah Kropp and me at a rehearsal break. “We really need sopranos,” he said. “We know you can do the high notes and you are a good singer.” I wasn’t sure if these laudations were directed only at Deborah or included me, but I fell for it. I just had to help out Ming et al make Carmina Burana a success. Vanity can definitely make us do things.

What followed were a couple of hectic weeks trying to get ahold of scores and practice music off the web. Also a CD from the Musical Offering. That part was easy. But the score took several days to arrive and my computer couldn’t unzip the practice music (or rather I couldn’t make it obey me). I had already missed one rehearsal before Jerry F had pulled me in. I was beginning to realize that I had made a bad mistake. There was enough on my plate already…I didn’t need to add this aggravation.

For the second rehearsal all I had was a copy of the lyrics that I had copied off a website. I limped through the rehearsal with Derek, thinking still more that this was a mistake, and would never have the piece in hand before the performance. I bugged the sopranos next to me to tell me where we were in the score and barely emitted a few notes. More than once I wondered what the heck I was doing there. I was supposed to be learning Britten’s War Requiem.

Interestingly, reading the lyrics sparked my first interest in the piece. Although I had heard the piece too many times to count, I had never realized that the lyrics were based on a collection of medieval poetry discovered in a German monastery. I was stunned by the visceral, sensuous images, and the melding of the naïve and the sophisticated, the baudy and the divine.

By the third rehearsal (getting very close now), I finally had a score and an inkling of what was going on. The first sing through of the piece with the score hooked me. I right away appreciated that Orff had bookended the piece with a bitter complaint against fortune, that wheeling juggernaut, that massive image of fate, that framed and dominated the imagined universe in the middle ages. A mental construct for coping with uncertainty and a sad resignation that adversity will come upon you when you least expect it (so you should expect it, ha!) And yes, it was so much fun belting it out, letting the rafters ring with our joined voices. If I heard the Carmina Burana too many times, I had never heard it this way.

We had only two rehearsals, when we arrived in Merced, one the afternoon we arrived and the dress rehearsal scheduled back-to-back with our performance on Saturday night.

As the piece started coming together, I especially loved the tribute to spring (with its temporal pleasures, as the world awakens after winter…and not to forget that you are already aware these pleasures will not last, glorious though they may be). The stately bell tones between sections impart a religious reverence, and a sense of stasis, as if freezing the moment in time.

I also loved number 13 (the Roast Swan) in which the trajectory of the Swan’s life, from swimming on lakes to being roasted on a spit and then served up for dinner replicates the life of humans, as the wheel of fortune turns, and our fortunes revolve with it. The tenor did a superb job, imitating the nasal quacking complaint of the swan.

The favorite singing part for me was number 24, the Ave Formossisma (Hail, most beautiful one), based on a now largely forgotten love story that was popular in the middle ages. We first sopranos got to earn our keep, reaching up to some very high notes, which luckily were manageable. This song conflates the Virgin Mary with Venus, an outrageous confusion of the divine and the secular.

But that confusion seems to be the point. The worship of earthly pleasures is, in the end, a tribute to the divine. By including this poem right before the Wheel of Fortune returns for the finale, Orff seems to be acknowledging something timeless that escapes fortune’s reach: the ideals of courtly love and the inescapable sense that whatever we consider the divine to be, it is rooted in our sensual and faulty perceptions and experience.

But wait, argh! I was going to focus on what it was like to sing the Carmina Burana in Merced. What can I say? It was in all ways an unexpected pleasure. The theatre itself was a glorious surprise. I was expecting it to be some concrete post-modern nightmare posted way out on a town fringe surrounded by a gargantuan parking lot. When I first laid eyes on this 1930s Spanish colonial revival beauty, with its exterior arches, its tiered tower, massive wrap-around marquee, and its welcoming entrance on a corner right in the middle of the life of the town, I was bowled over. And then, of course, the theatre was situated right next to a genuine local coffee shop, Coffee Bandits, that served a mean cappuccino, quite welcome during breaks between the rehearsals and the performance.

At night the marquee was lit up with decorative neon lights that could be seen from blocks away. The announcement of Carmina Burana with the Merced Symphony in large letters gave us all a sense of pride.

The inside of the theatre was a special treat. Three-dimensional plaster faux villages were built into the side walls. Interesting viewing boxes, interior archways, a graceful balcony, wow! Period light fixtures, elaborate glass and wrought iron concoctions, graced the lobby and the auditorium. I learned that some light fixtures were original and some were copies, but the copies were so good that no one can now remember which are which. During the performance, special lighting effects included images of clouds that swam across the ceiling.

This theatre is an act of love and there are still bills to be paid and more work to be done. I was happy to hear that the proceeds from the ticket sales for our performance would help pay for the restoration work. When we singers learned that tickets cost $39, we felt important…although some wondered if people in town would pay that much to hear us. To our surprise, a nice crowd turned out and gave us a great ovation.

The stage was crowded. When the theatre was rehabbed, there was talk of adding an orchestra pit, but nothing came of it. But we loved the closeness and intimacy. The orchestra players were literally squeezed up right in front of us; and many a female singer became entranced with the young drummer whose back was to us, and who loved his work, plying his drumsticks with élan and gusto.

I asked several BCCO singers what they found most enjoyable or unique about the experience. Nancy Benson had a lot to say: “Singing with strangers…and the way the whole piece came together so fast.” Nancy sat beside some “really good singers” (as most of us did). She struck up conversations with several and heard some great stories, and she ran into new her acquaintances in town.

She and others mentioned enjoying the watching the 5 percussionists, and she sat right in back of a “young, dynamic” trumpet player. Several mentioned singing with so many good singers from other choruses.

Several singers mentioned the youthful and professional orchestra, which Ming announced had been in existence continuously for 58 years. Nancy said, “the orchestra was spot on,” a good way of putting it. Jeanne Butterfield enjoyed most watching Ming’s face, the way he raised an eyebrow when he was pleased and danced to the music on the podium.

Deborah Kropp loved the soloists and Ming’s good spirits. She also appreciated Derek’s mature leadership and helpfulness as he ran us through the rehearsals.

My friend Birgit Urmson, who sings with the San Francisco City Chorus, was struck by the “fresh talent of the local symphony” ….she enjoyed the experience of shaping music under both Derek and Ming and “hearing it come together.”

Ming did seem different. Several BCCO chorus members mentioned his jovial mood, his dance-like movements, and his smile as we were singing. I am not sure I have ever seen him so happy with us.

Of course, we had help. Apparently 13 choruses were represented in our ad hoc chorus. I met singers from the UC Alumni Chorus, the San Francisco City Chorus and the Conservatory of Music, as well as the Merced Chorus.

I sat next to a nineteen year old San Francisco Music Conservatory student Kayla (whose last name escapes me) and her friend, Rebecca Woiteshek, an experienced singer of various choruses. My friend Birgit and I ended up having dinner with them at a nearby Thai Restaurant two nights in a row. We also went to a bar after the performance with our Merced host Judy (another last name I didn’t catch), who has done major fundraising for the theatre.

Rebecca and I exchanged phone numbers and email addresses and plan to stay in touch. She is going to send me an invite to a performance of 15th century music with modern rifts on it coming to Los Angeles. I hardly said “boo” to my fellow BCCOers the whole time we were in Merced.

As I have often experienced in the past, I learned to love the music by singing it. I often have this sense, as I know other singers do, of getting inside the music, as if the notes and you are inseparable, a sensation that is not so easily achieved by simply listening.

On one of those hectic days leading up to the performance, I had a revelation as I was studying the score. It was this: that as long as notes stay on the page they are nothing but inarticulate marks. It is only by singing and interpreting the notes that they flare up into a composition. The composer needs us to make his music a real tangible thing; and each time a piece is sung it is a new composition.

Then it really hit me. I had thought this piece was a bit of an old war horse, heard so often that it had lost its life. But, actually, I had never really known it. Singing it, helping it come to life, made it exciting and unique. There is a raw, primal power to this music and the text; I enjoyed getting inside the world it conveys and projecting it outward with something akin to controlled abandon.

Singing this piece in the venerable Merced Theatre, with a salad of singing colleagues, an audience of strangers, a conductor who radiated pleasure at our every note, I had the strong sense of singing something I had never heard before.