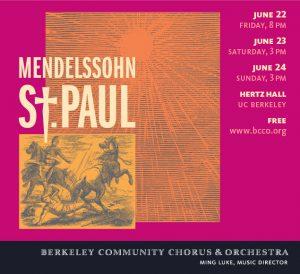 The oratorio opens with an oblique reference to the Old Testament, the God in Genesis who made the heavens, the earth and mighty waters. “The heathen furiously rage” follows hard upon, revealing a deep chasm in human consciousness, a chasm that the musical narrative will attempt to bridge.

We conclude the first section with “Grant to thy servants all strength and joyfulness that they may preach thy word,” foreshadowing the drama. “Word” is drawn out, the thing needful, the gift of speech laden with message.

We open the oratorio assertively and joyfully, repeating “Lord” for emphasis, a sign of certainty and recognition. “Lord” is extended through several bars, as if the name fills the universe. But this lord an object of awe and respect; there is an implied distance between this majestic being and the communal voices that praise his hegemony.

Saul, now to be Paul, also utters the word “Lord” when the voice calls out to him on his way to Damascus. But he hears it with a difference: Saul, why persecut’st thou me?” asks a voice that assumes a personal relationship. The God of the heavens has been drawn into a human dialog, fraught with emotion on both sides.

“Lord, who art thou?” Paul answers the question with a question, at once acknowledging who is speaking to him, but also thrown into a state of confusion. We know at once that Saul’s life has been thrown upside down; he knows and doesn’t know at the same time.

The last word we sing is “Lord,” creating a kind of envelope around the oratorio. As in the opening assertion, our communal voices are joyful and assertive. But “Bless ye the Lord,” is sung with a difference, completing the narrative arc. The tone is excited and gleeful, as if making a new discovery.

From the first chorus’s awe and respect as we acknowledge God the Creator who rules over all, to the puzzling voice that arrests Paul on his journey, to the development of a dialog and intimate relationship with this “Lord,” we end on an affirmation of the reciprocity of this relationship; the God of the heavens is now within reach.

Choral #3 choral sets the stage for the poignant death of Stephen. I pondered for some time how Stephen’s death fit into the narrative. Wasn’t one saint per oratorio enough? Couldn’t he have put Stephen in a different oratorio and made this just Paul’s story?

From one perspective the entire oratorio is about speech. Stephen is accused of unlawful speech and we hear his words first indirectly through the Pharisees. He doesn’t speak until Choral 6, when he reviews the history of the Old Testament before admonishing his persecutors for resisting the holy ghost.

As he dies he forgives, “Lord, Lay not this sin to their charge” before he relinquishes life in the Choral 9.

It is striking that Stephen has the gift of speech, while Paul, a prime persecutor, stays in the background, and does not. Instead, consenting Paul is enveloped in another narrative, sandwiched between Stephen’s last words on earth and our commentary on his reward “Happy, for though the body dies, the soul shall live forever.”

The first time we hear Saul, it is with words of revenge, in clear opposition to Stephen’s words of forgiveness as he dies. Paul’s experience on the road to Damascus forces him to look backward on his words and actions. He is remorseful, aware now of his transgressions, and asks for God’s grace, which he feels he does not deserve. Stephen, then, serves as a marker for Paul’s transformation. Paul did not show mercy or grace toward Stephen, and he feels he is hardly in a place to deserve it from God.

On the road to Damascus, Paul experiences the sublime, that contact with something overwhelmingly powerful that lifts us out of ourselves, a moment often fraught with terror, that was one of the prime hallmarks of Romanticism. Byron, Wordsworth and Keats were surely on our composer’s library bookshelf as was, of course, Goethe. Elijah and Paul may be seen as adaptations of the Byronic hero, just as Mendelssohn’s musical tributes to Scotland celebrate a rough, primal and mystical contact with nature so loved by many romantics.

The 18th century God ran the world like a clockworks, setting the world in motion and letting it run. This God was remote, avoiding intervention in the human world. Reason rather than emotion dominated in this rather mechanistic world view. Mendelssohn, in bringing this God down to earth, participated in the romantic artists’ urge for contact with the sublime, the supra-earthly, the larger than life, his sublime music celebrating that ineffable moment of contact.